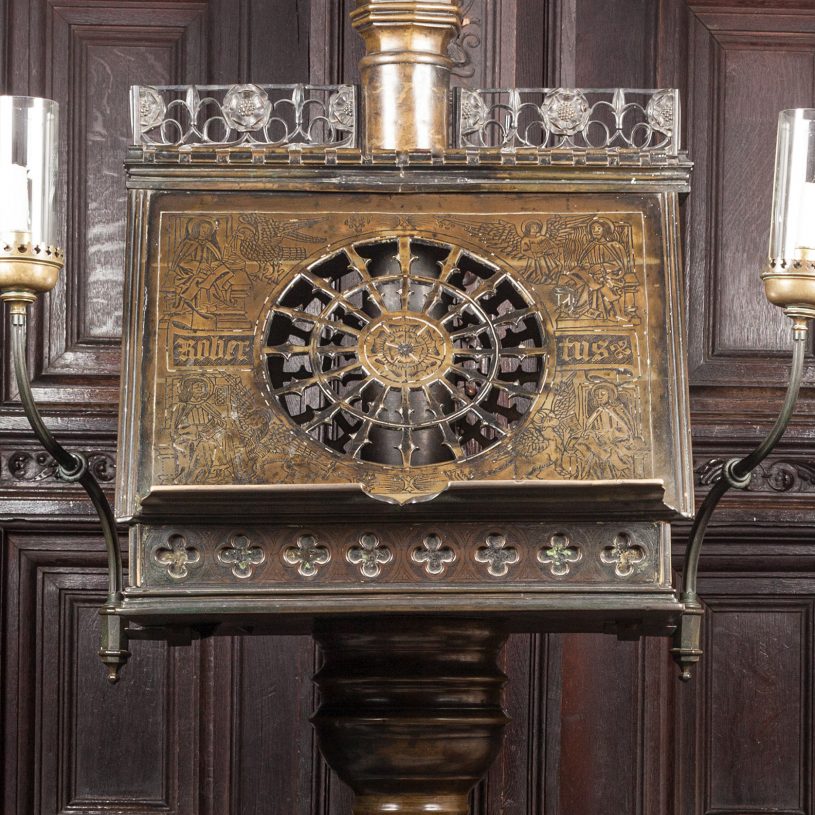 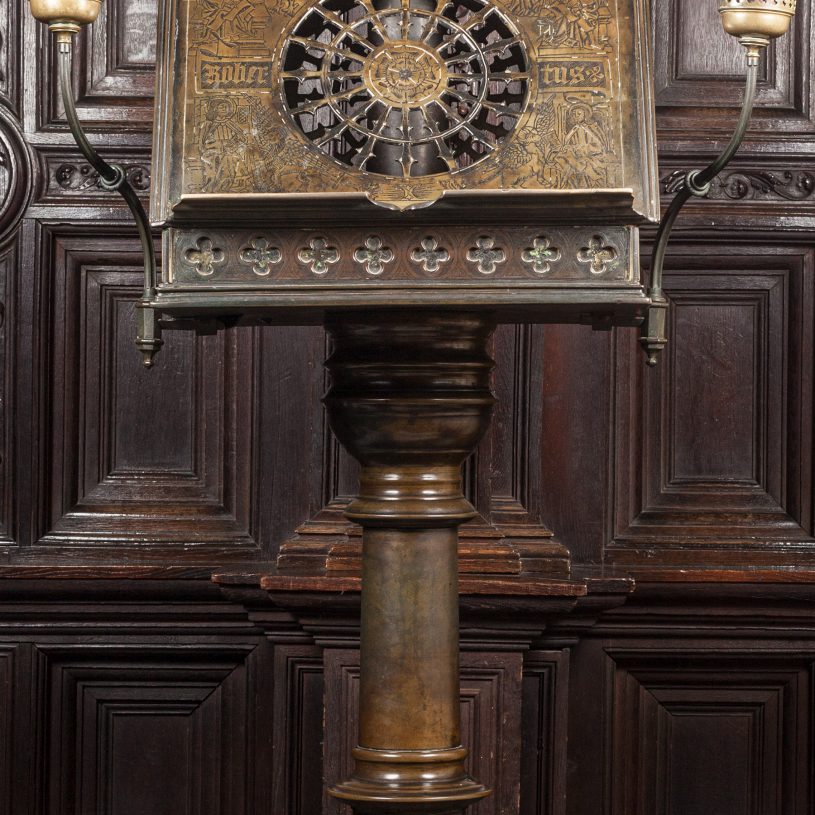 Hacomblen’s Lectern is a tall stand, from which someone, typically a preacher or lecturer, can read while standing up.

Made of brass, which has darkened with age. It is nearly two metres tall. At its base are four little lions around a pillar, on top of which is a double-sided book rest, both sides of which have a large, central, perforated wheel design.

One side is engraved with roses, the donor’s surname ‘Hacomblen’, and the College’s arms, in the middle of the wheel; the Old Testament reading is traditionally read from this side.

The New Testament is read from the side with Christian information: it is engraved with the donor’s Christian name ‘Robertus’ and with signs of thefour  Evangelists, as well as the rose in the centre of the wheel. The writing is in Gothic script, which was usually used in brass engraving in the 16th century.

On top of the book rests, there is a statue of Henry VI, who founded King’s College in 1441. He is holding the orb and sceptre that symbolise the monarch of England. There is a dragon at his feet.

For hundreds of years, it was used to read from the Bible at daily services. In 1774, perhaps because it was considered old-fashioned, the lectern was stored in one of the side-chapels.

The ‘cult’ of the Five Wounds of Christ was a method of devotion popular in medieval England, and one to which Hacomblen was dedicated.

Robert Hacomblen had it made and gave it as a gift to King’s College. He was Provost from 1509 to 1528, while the Chapel was being finished, meaning he oversaw the installation of the fantastic stained glass windows and the graceful fan-vaulted ceiling, which is the largest in the world inf this style.

We don’t know for certain why he decided to donate it. During the Wars of the Roses [1455-87], the fate of the College and its half-built Chapel were uncertain, and Hacomblen would have spent many hours worrying whether the Chapel would ever be finished. Once it was finished he would have wanted to give thanks to God and to leave a permanent gift to the College, that was appropriate to the magnificence of the Chapel. The lectern was part of that legacy. 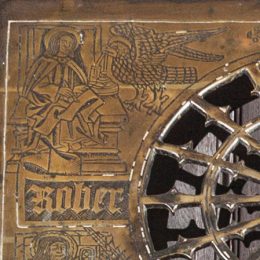 In 1854, it was cleaned and returned to take pride of place in the chapel, resuming its liturgical (public worship) function of supporting the volumes from which the lessons are read every day. Only three similar lecterns exist in the UK, though there are 45 pre-1550 lecterns in England; most Medieval lecterns are in the shape of an eagle.

The lectern is the most visible of Hacomblen’s contributions to the Chapel, all of which were made as devotional gifts, a common Medieval practice. He also furnished one of the side-chapels as a chantry, where he is buried and where the decoration includes the symbols for the Five Wounds of Christ, he also left money for masses, of the Five Wounds, to be said for him, and a gilt chalice, (also decorated with symbols of the Five Wounds) – a goblet from which wine is drunk during the Eucharist: the receiving of bread and wine, when some Christians believe they become the body and blood of Christ. Other Christians believe the true body and blood of Christ are really present in, with, and under the bread and wine, which remain physically unchanged, or in a real but purely spiritual presence of Christ in the Eucharist. Still others take the act to be merely a symbolic re-enactment of the Last Supper.

The ‘cult’ of the Five Wounds of Christ was a method of devotion popular in Medieval England, and one to which Hacomblen was dedicated. Though Anglicans today might consider it gruesome, they still share the same spirit of honouring Christ’s suffering as an integral part of our salvation. Chantries, and the offering of prayers for the dead in order to reduce their time in purgatory, became unpopular about 40 years after Hacomblen died, though they continue to be said by Catholics. Many Anglicans, especially in the High Church tradition, are reviving the saying of prayers and masses for the dead.

Provost Hacomblen also wrote religious music, of which only one piece survives, a setting of Salve Regina in the Eton Choirbook. Eton College was founded by Henry VI at the same time that he founded King’s College. 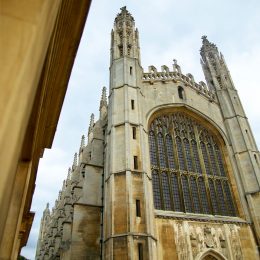 Robert Hacomblen
The Evangelist symbols
The ‘cult’ of the five wounds

Robert Hacomblen
The Evangelist symbols
The ‘cult’ of the five wounds