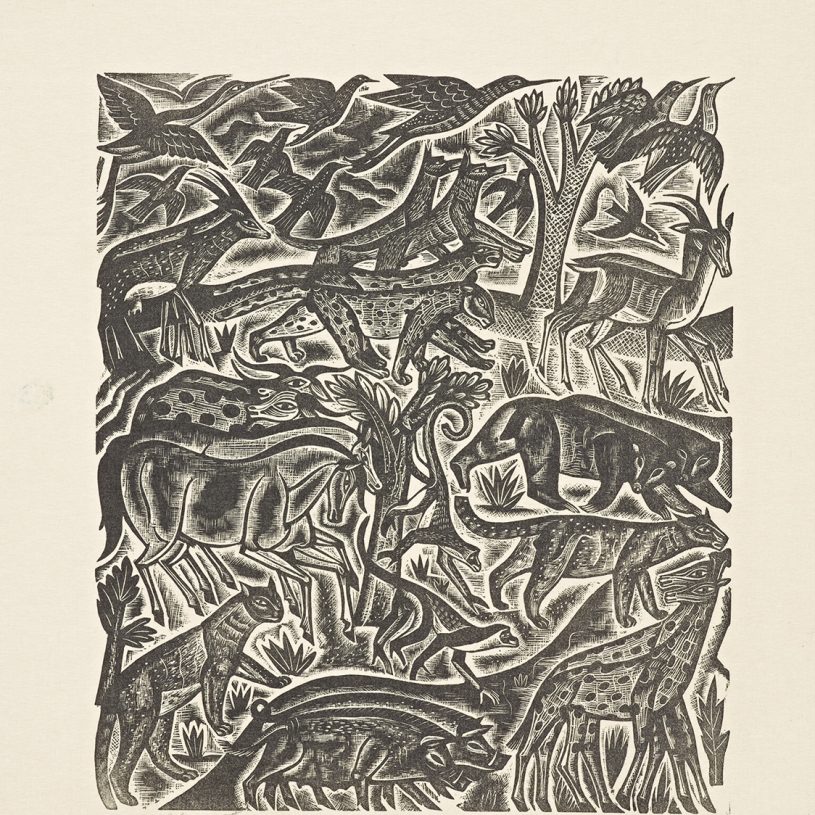 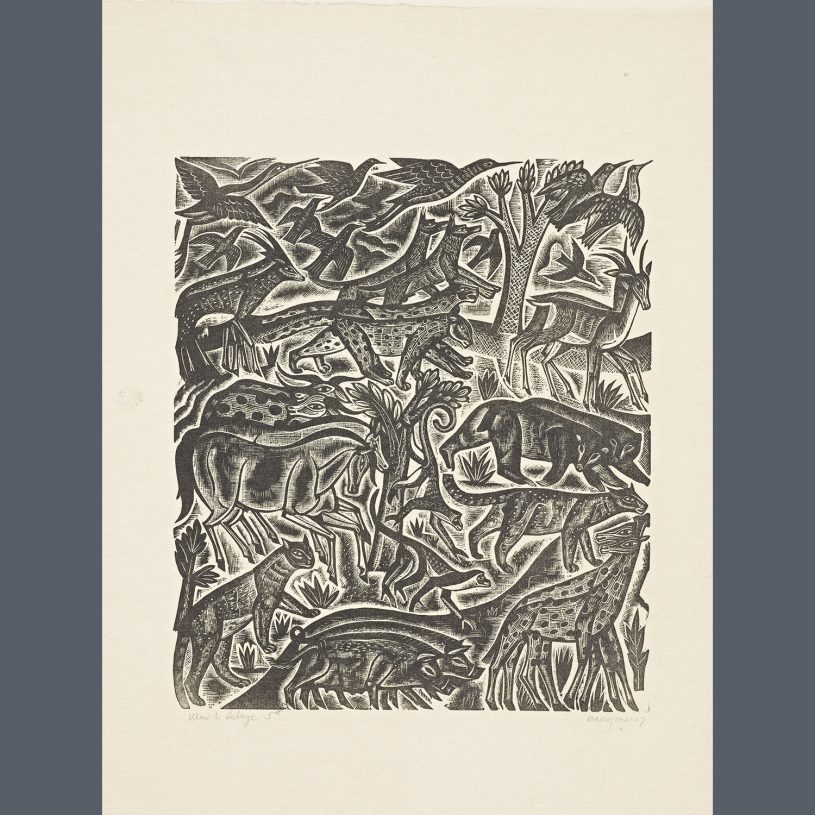 The Beasts after their Kind

This image depicts the moment just before the flood, when animals of every kind went into the ark.

This is a woodblock engraving on paper, for a book illustration of the medieval mystery play, The Chester Play of the Deluge. The Chester Play is an imaginative retelling of the biblical story of Noah and the Great Flood, (Genesis 6-9). This image depicts the moment just before the flood, when animals of every kind ‘went into the ark with Noah, two and two of all flesh, in which there was the breath of life’ (Genesis 7.15-16).

Over sixteen different pairs of ‘Beasts after their Kind’ are compressed into the small space, (167 x 144 mm), of this playful and dynamic illustration. Dark blacks and shaded greys contrast sharply with an illuminating white, that outlines each figure. From bears and monkeys, gazelles and leopards, to ravens and herons, the unique character of each animal is carefully crafted in detail. The strong continuous lines of their diverse forms create a unified, rhythmic sense of movement as the animals march, gallop, creep, and fly together, towards the ark that will save them from the impending flood or ‘deluge’.

The story of The Deluge was performed on a wheeled cart, in the form of a ship, by those responsible for drawing water from the River Dee to the town of Chester. The plays were performed every year until the 16th century, when they were banned as part of the reforms of the Church.

This image depicts the moment just before the flood, when animals of every kind ‘went into the ark with Noah, two and two of all flesh, in which there was the breath of life’.

This was produced by 20th century artist and poet, David Jones (1895-1974). Though far less well-known than he deserves, Jones is one of the most extraordinary artists of the 20th century. He worked with a range of mediums, including watercolour, wood and copper engraving, lettering, and poetry. Jim Ede—once curator of the Tate Modern and creator of Kettle’s Yard Cambridge—spoke of him in 1940 as “not only the best water-colourist working in Great Britain today but by far the best engraver, a poet and writer of genius, in all a most imaginative artist.” At the young age of 14, his parents sent him to Camberwell School of Art where he studied until he enlisted as a soldier in World War I. It was, surprisingly, in the context of war, that David Jones’ imagination as an artist became indissolubly wedded with his Catholic faith, and his first epic poem, In Parenthesis, was forged out of this experience. After the war, he joined a community of craftsmen and women at Ditchling Commons, founded by Eric Gill and Hilary Pepler, and it was here that he first learned how to engrave on wood.

David Jones was commissioned by Golden Cockerel Press to produce this wood engraving for a new edition of one of England’s oldest and finest mystery plays, The Chester Play of the Deluge.  From his earliest years, David Jones loved drawing animals and would spend much time at London Zoo, studying and sketching the lions, bears and other wild creatures. He would later become one of the best wood engravers in Britain and his illustrations for The Deluge are widely considered to be among his best. Here are a few lines of the play, which Jones’ image illustrates:

Camels, asses, man may find,
buck and doe, hart and hind.
All beasts of all manner of kind
here be, as thinketh me.” 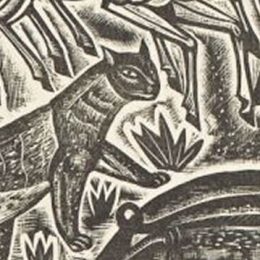 Since the early 20th century, and increasingly so in recent years, there has been a great revival of interest in medieval mystery plays. The Chester Plays themselves will be performed at Chester Cathedral in the summer of 2018.

The Chester Play of the Deluge, which Jones’ image illustrates, was first composed in the mid-14th century, as part of a cycle of plays based on biblical stories from Creation, Abraham and Isaac, to Jesus of Nazareth and the Last Judgment. Each play would be performed by a different group of craftsmen and women, including barbers, painters, blacksmiths and bakers. The story of The Deluge was performed on a wheeled cart in the form of a ship, by those responsible for drawing water from the River Dee to the town of Chester. The plays were performed every year until the 16th century, when they were banned as part of the reforms of the Church.

The story of The Great Flood, which The Chester Play imaginatively retells, is part of both the Jewish and Christian Scriptures. It is both a story of judgement on all the earth on account of the violence of human beings, but it is also ultimately a story of God’s grace through the building of the ark, through which creatures of every kind are spared, and with whom God makes an everlasting promise of faithfulness. The story of the Flood and Jones’ engraving of ‘The Beasts after their Kind’, in particular serve as a reminder, that the study of religion concerns not just human practices and beliefs but the relationship of all living things with God. 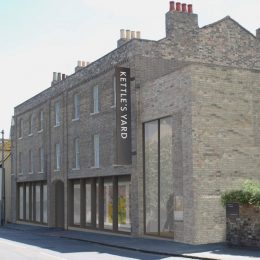 Kettle’s Yard reopened in February 2018, with a new wing, improved galleries, a new entrance area and café. Visit their website for details of opening hours and special events.